Camping out on regional rail-trails

Want to experience the thrill of hoboing without the danger of getting mugged while sleeping in a dirty train car? If so, an overnight trip on local rail trails may be just what you need. 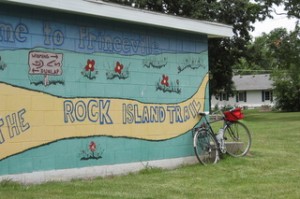 Well, yeah, it’s true that you’re not going to find any trains along local rail-trails. But you will find that these long linear paths provide an adventurous way of seeing the countryside and experiencing a taste of local history.

For a longer rail-trail trip, most people prefer to saddle up on a bike. This is because hiking more than a couple of miles along a gently graded and straight-as-an-airplane-runway trail often induces the desire to nap. And, of course, schlepping your camping supplies is simplified immensely on a bicycle.

Camping options alongside local rail trails come in various styles, and range from a fire pit and small patch of grass to pitch your tent to red carpet treatment with spacious campsites, picnic tables, nearby hiking trails, and–rejoice–restrooms.

Most cyclists choose to ride rail-trails out-and-back. Some opt for leaving a vehicle at one end of the trail. However you do it, here are few options within a 3-hour drive from Chicago.

Initially running from Chicago to the Quad Cities, the Rock Island Railroad Line soon branched out to 14 states and played an important role in bringing white settlers west. The railroad acquired nearly mythical status by way of a folk song first recorded in a southern prison in the 1930s, and later recorded by everyone from Lead Belly to Johnny Cash to Pete Seeger.

North of Peoria, a section of the Rock Island Line has been transformed into a 26-mile-long path. Five miles outside of Peoria, you’ll encounter Kickapoo Creek Recreation Area, a spacious trailside campground within an oak savanna. The park’s campground is specifically for Rock Island Trail users, as well as people who are willing to walk a half mile from the nearest parking lot. While you’re there, take a hike along several trails that run through a restored prairie and alongside a stream.

Don’t miss: The graceful old trestle bridge over the Spoon River at the north end of the trail. 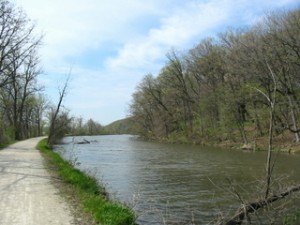 Completed in 1848, the 96-mile-long Illinois and Michigan Canal provided the final shipping link between Chicago and the Gulf of Mexico. As a result, Chicago became the largest grain market in the world. Mules were guided on a path alongside the waterway as they pulled canal boats halfway across the state.

Better described as a mule trail than a rail-trail, I&M Canal Trail now runs from the outskirts of Joliet west to the town of LaSalle. From end to end, the I&M Canal Trail wanders through a variety of landscapes: dense woods, marshes, prairies, riverbank, agricultural land, and small towns. Primitive campsites appear along the side of the path, as do small public campgrounds in the towns of Channahon and Morris. The best camping spots are alongside the Illinois River at McKinley Woods. (Call first: As of the late June, 2008, a couple sections of the I&M Canal Trail were closed–but not impassable–due to erosion damage.)

Don’t miss: Between Channahon and McKinley Woods, the route traces a thin sliver of land between the canal and the wide and mighty Illinois River.

After it was finished in 1907, the Hennepin Canal never gained the prominence of the nearby I&M Canal. The growth of railroads, the waning production of Illinois coal, and the dredging of the Illinois River all conspired to make it obsolete. Nine small campgrounds are spaced out along the 62 miles of the main Hennepinn Canal Trail running from north central Illinois to the outskirts of the Quad Cities (camping is not allowed along the 29-mile north spur of the path to Rock Falls).

Along the way, don’t expect to see any towns. But you will see big soft shell turtles basking on logs, great blue herons fishing along the banks, and kingfishers and hawks looking for meals from above. Small wooded bluffs often appear alongside the east half of the canal, while wide-open corn country dominates the west half.

Don’t miss: 32 locks that were used to raise and lower the boats on the canal and six aqueducts that carried the canal and its traffic across rivers and streams.

Distance: 91 miles one way (including the north spur)

Named for the many glacial mounds bulging up from the Wisconsin landscape on the eastern half of this trail, the Glacial Drumlin Trail runs from Waukesha to Madison. It cuts through a half-dozen towns and skirts the edges of numerous lakes, 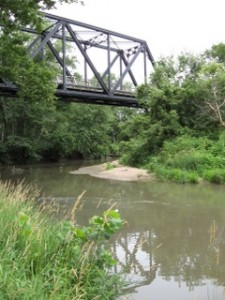 ponds, and wetlands. Plenty of farmland appears along the way. At the west end of the trail, you’ll meet up repeatedly with Koshkonong Creek and cross the southern tip of Rock Lake. Near Lake Mills, keep an eye peeled for a herd of bison.

The Sandhill Station State Campground, less than a mile south of the trail near Lake Mills, offers walk-in campsites near the shore of Mud Lake. Keep watch for the campground’s namesake bird, an enormous grey crane with a red spot on its forehead. At the west end of the trail on the outskirts of Madison, cyclists can continue pedaling on the Capital City Trail; the east end of the trail connects with the Fox River Trail in Waukesha.

Don’t miss: Between Dousman and Sullivan, the trail passes through a vast marsh busy with waterbirds.

For the past couple of weeks I’ve been wandering through the southernmost reaches of Illinois gathering information for the outdoor guidebooks that I’m currently writing. In addition to charting a handful of road biking routes and dozens of camping destinations, I also was documenting hiking trails for the Backpacker magazine website. 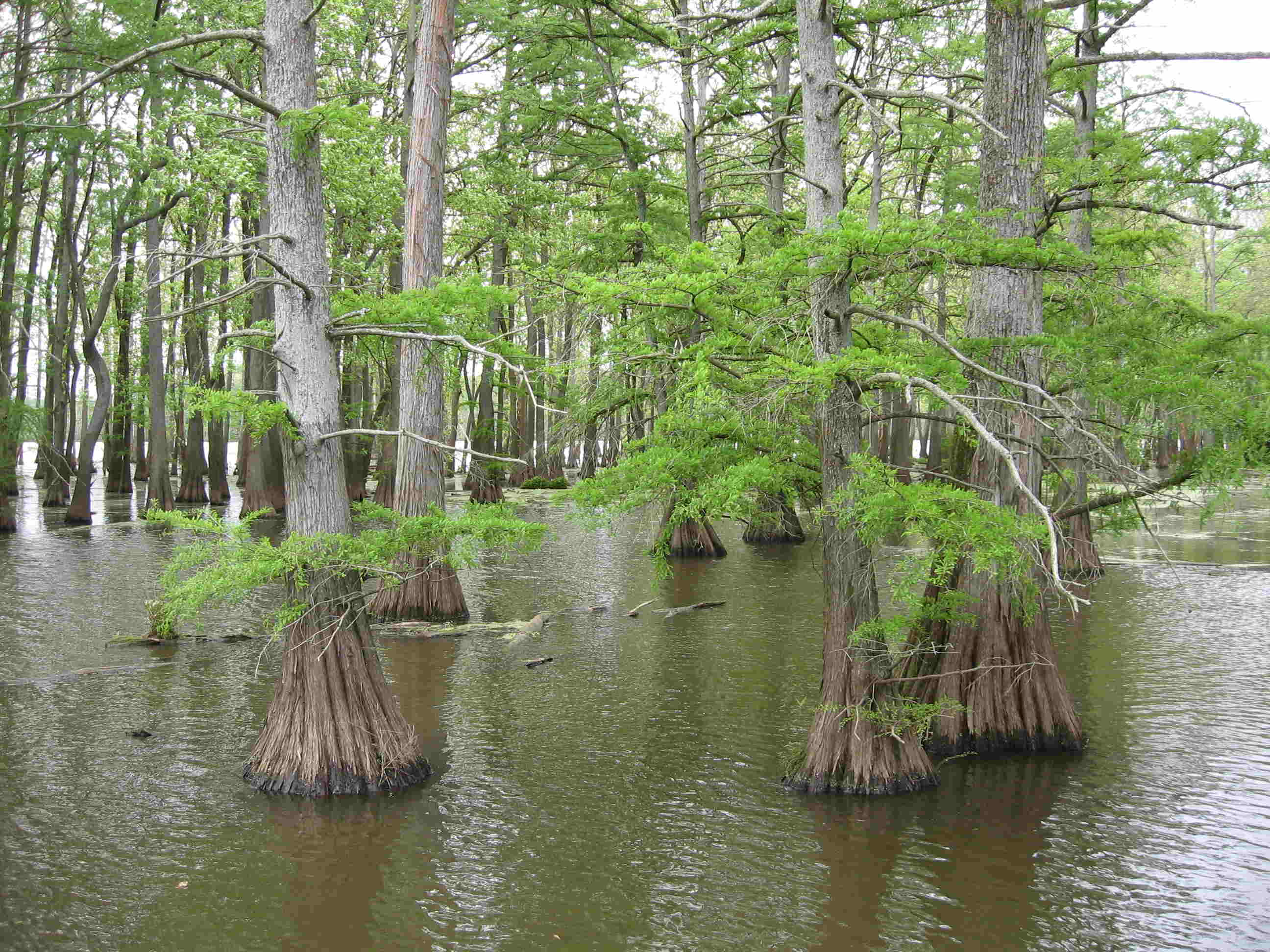 I was especially eager to explore the Shawnee National Forest, a huge tract of wilderness at the southern tip of the state, known for its rugged beauty. As it happened, rain fell frequently. Floodwater swallowed up a few of the trails and campgrounds I visited. Two campground access roads were blocked with mud slides. My bicycle survived heavy downpours; my boots were frequently caked with mud.

While dodging the worst of the rain, I discovered plenty of scenic spots. The subtle beauty of the cypress swamp at Horseshoe Lake (pictured here) and the jaw-dropping drama of the rock formations at Garden of the Gods were just a couple of places that left strong impressions on me. In coming weeks, I’ll be sharing highlights from my downstate travels.

The elusive hills of Chicagoland

When I tell people that I wrote a hiking guidebook for the Chicago region, their first question often has do with the whereabouts of local hikes with hills. When I get this question, I often direct people to the Indiana Dunes, the Palos/Sag Valley Forest preserve in southwestern Cook County, and Chain O’ Lakes State Park in Lake County.

If people ask for advice on hilly road biking routes in the area, I find myself on shaky ground. I let them know that I’m in the process of researching a biking guidebook for the Chicago region and have yet to explore many of the local road biking routes. After that disclaimer, I’ll mention possible routes in McHenry County and even more options further north into Wisconsin. 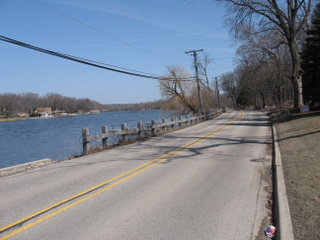 Given the bustle of the suburban landscape surrounding Barrington, I was utterly surprised with its rural atmosphere, and found myself congratulating the Barrington residents who fought to preserve their wooded hills, their sprawling marshlands, and widely spaced farms and houses.

One of the highlights of the ride was following River Road—a wavy ribbon of asphalt that parallels the wide and mighty Fox River outside the town of Algonquin. River homes with big porches and inviting yards line the sides of the river along this road.

Another highlight of the ride was pedaling alongside Spring Creek Valley Forest Preserve—4,000 acres of densely tangled woodland, tranquil prairie, and reedy marshes active with birds. Interrupting the savannas and the wetlands are oak- and hickory-laden hills, some of which are steep enough to shift into the granny gear. Mixed in with the woods and open space are horse farms, scattered houses, and the occasional lavish estate.

If you know the area, you know that Barrington is not the average upscale suburb. While average-sized houses do exist, many of the dwellings are better described as mansions, country manors, or in some bizarre cases, castles. 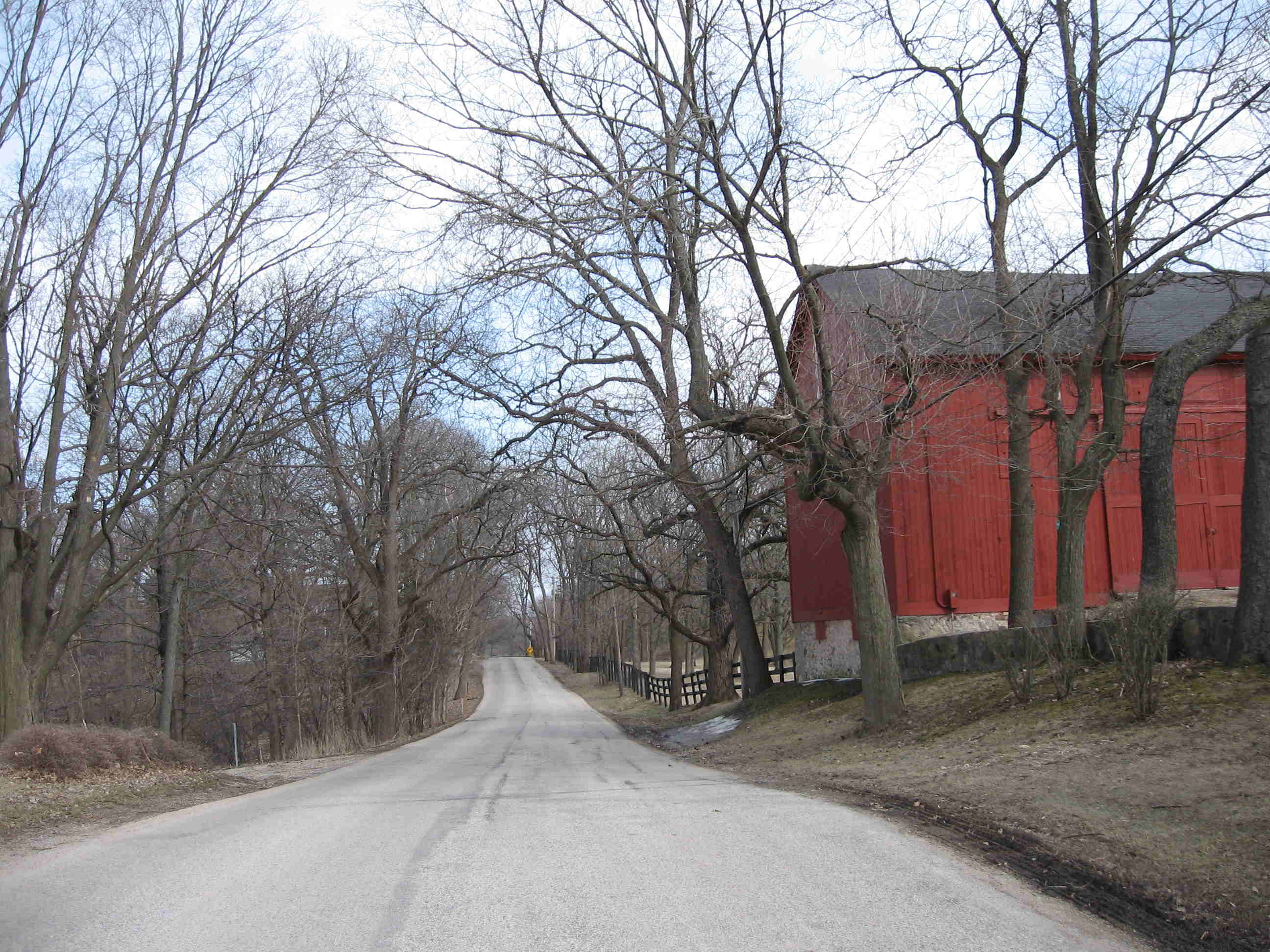 If you live in Chicago or some of the adjoining suburbs, Barrington is a snap to get to on the Metra. I started from the Metra Station in Fox River Grove on the Union Pacific District Northwest Line.

Some of the roads that were best for cycling were North River Road, Spring Creek Road, Bateman Road, Penny Road, Old Sutton Road, and Otis Road. Many of these run through or border Cook County Forest Preserves.

The full ride description and map will appear the Best Chicago Bike Rides, to be published by FalconGuides. 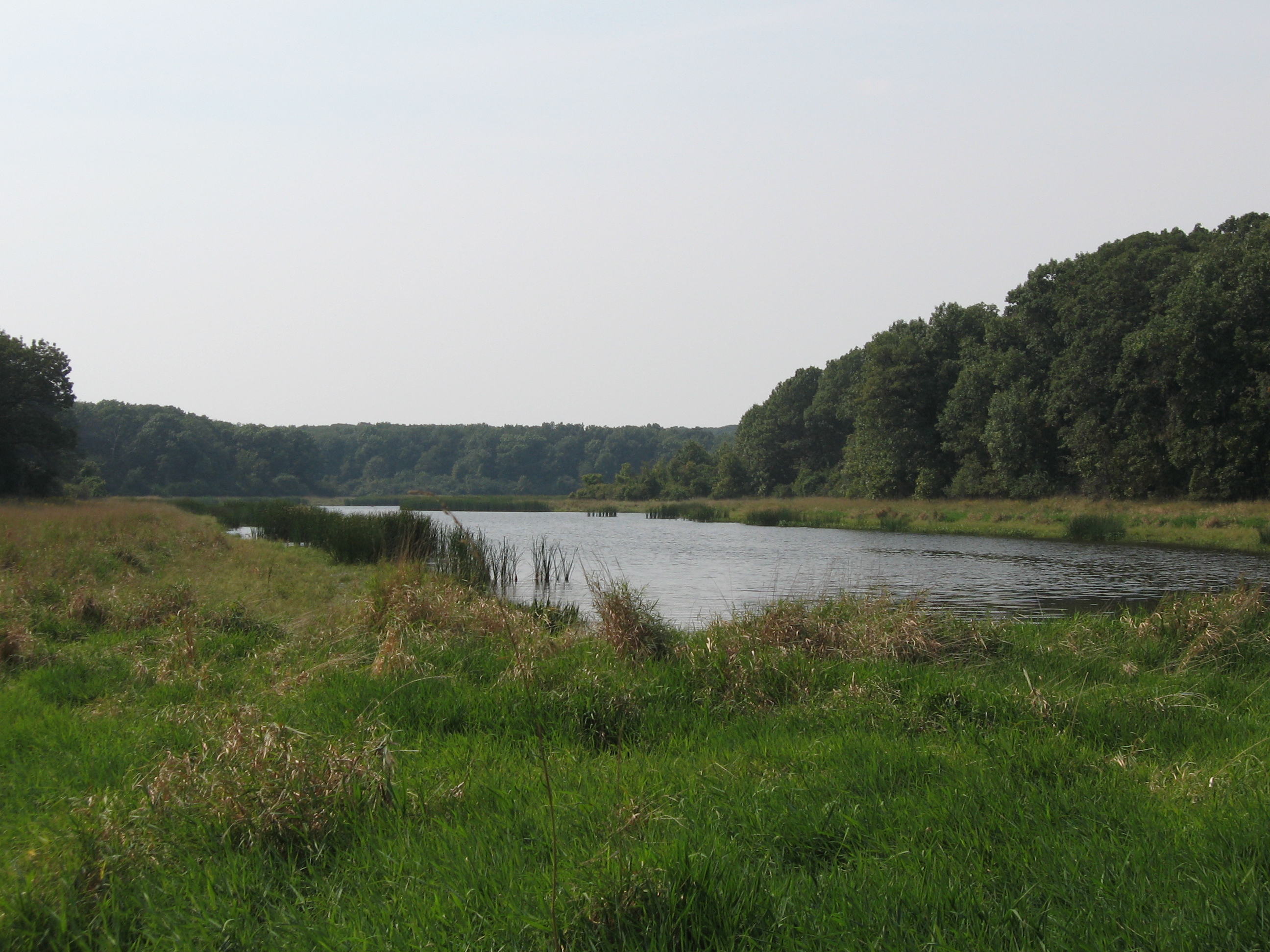 Thanks for visiting Prairie Fever. My name is Ted Villaire, and I’m a writer from Chicago who delights in open-air excursions. I spend a great deal of time hiking, biking, and paddling.

My activities are typically focused near Chicago or elsewhere in Illinois. Occasionally, though, I’ll venture out into other corners of the Midwest. My outdoor travels allow me to gather information for books and articles. In 2005, I wrote a guidebook for day hiking near Chicago, and currently, I’m writing four more guidebooks focusing on biking and camping near Chicago and throughout Illinois.

I’m glad to reveal that not all of my excursions are work-related. Sometimes, I lace up my hiking shoes simply because I enjoy exploring the local landscape and seeing what’s around the next bend. In any case, through the posts on this page I intend to share my discoveries and offer suggestions on where readers can pursue outdoor wanderings of their own.