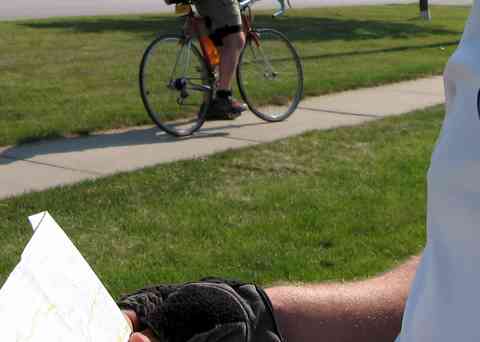 A good bicycle map is essential to cycling in the city. Such a map will point you to less-trafficked roads, roads with bike lanes, and roads with an ample shoulder for riding. It’ll also tip you off to cycling paths, and, in some cases, local bike shops.

While cycling around the city, the map I use the most is the free Chicago Bike Map. This map shows bike lanes and preferred routes for the entire city. It’s free and incredibly useful—what more could you want? The downside of this map is that it’s made from very low quality paper and starts to fall apart almost immediately.

Chicagoland Bicycle Map. Produced by the Active Transportation Alliance (formerly the Chicago Bicycle Federation), this map is now in its 4th edition. It shows the best cycling routes through a particular area; the routes are then rated according to ease of use. Since this map costs $7 (ATA members receive the map for free), I decided to push the envelop on geekiness and have the map laminated. (While lamination renders a map practically indestructible, it does make folding cumbersome.)

Illinois Official Bicycle Map: Chicago and Northeastern Illinois.This map, published by the Illinois Department of Transportation, takes a different approach compared to the ATA map. Instead of showing a preferred route through a particular area, it shows suitability of all roads within a given area. This map loses much detail, though, once you get into areas with densely situated streets. Another freebie, this map is one of a series of nine cycling maps produced by IDOT focusing on the entire state of Illinois.

Northwest Indiana Bike Map. Just released in the spring of 2008 by the Northwestern Indiana Regional Planning Commission, this map fills a much needed gap in local cycling resources. The single time I’ve used this map, it proved enormously useful. It looks and feels much like the ATA map in that it shows a minimum number of preferred routes through a particular area.

This entry (Permalink) was posted on Sunday, September 14th, 2008 at and is filed under Biking, Chicago area. You can follow any responses to this entry through the RSS 2.0