Down the lazy river 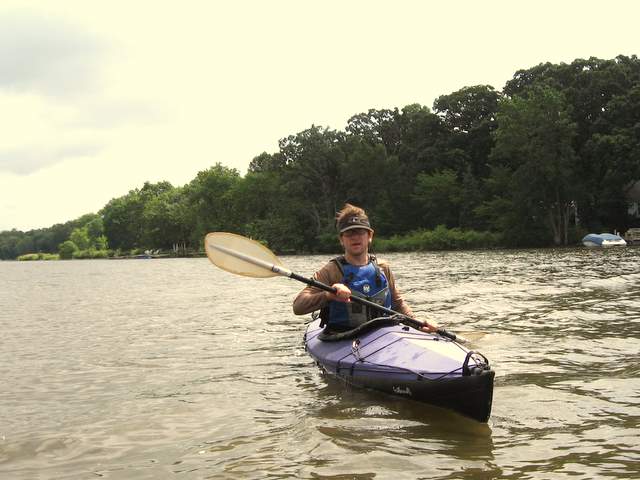 A July morning on the Fox River

The following article first appeared in the May 2010 issue of Competitor Chicago magazine. Thanks to the magazine for allowing me to post the article here.

Ten feet above my head, a single swallow twirled through the air, every so often dipping down to skim the water in front of my sea kayak. After spraying a bit of water along the surface, the little bird flapped feverishly to regain its former position above my head and start the process again. Getting a drink of water on a warm summer day never looked so fun.

I was paddling a dozen miles on a mid-section of the Fox River as it flows through the western suburbs of Chicago. I decided to launch in Elgin and pull out downriver in Geneva because both cities contain Metra stations, allowing access to and from the river with my 13-foot folding sea kayak. The kayak and all the necessary gear stuffs into a large backpack that weighs about 45 lbs.

The Fox is a wide, slow-moving river. Multiple dams keep the water moving at a sluggish pace, often creating the feel of a long lake rather than a moving river. Some paddlers find lazy rivers like the Fox boring because the only navigational imperative is to keep yourself from drifting into the private docks and colliding with the occasional motorboat whizzing past. As someone who typically prefers paddling narrow, fast rivers that run through woods and countryside, I was surprised by how much I enjoyed the Fox’s calm, steady flow. It provided an opportunity to decelerate, let my thoughts wander, and enjoy a day of dawdling.

First portage: smooth and short
My lazy river vanished when the wind picked up, causing small waves to splash over my kayak’s bow. The wind blew north while the river flowed south, canceling each other out. When I stopped paddling, I remained stationary or started drifting toward shore. The wind relented as I approached the first portage.

To get around the 8-foot dam in South Elgin, I pulled the boat up a small embankment of rip-rap, over a guard railing, and then dragged the kayak 75 yards through Panton Mill Park. After lounging in the park and filling up my water bottle, I rejoined the river and soon glided past another park—this one containing a collection of old trolley cars on display at the Fox River Trolley Museum. A steady stream of cyclists cruised up and down the Fox River Trail. 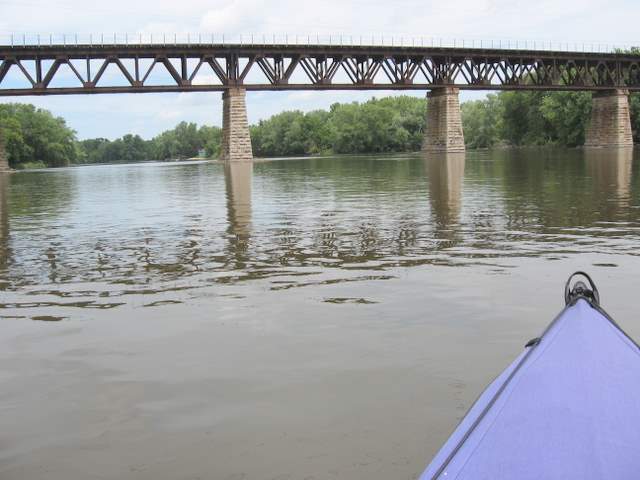 Heading under a railroad bridge south of Elgin

The current quickened as the river threaded its way around a cluster of islands, most of them wooded. One was just a sandbar where someone had installed a birdhouse high on a steel pole. After passing through the supports for a pedestrian bridge for the Fox River Trail, the river runs between two forest preserves. Red oak, silver maple, and occasional willow trees decorate the banks of John J. Duerr Forest Preserve on the right and Tekakwitha Woods on the left. Kingfishers chattered from nearby branches; turtles plopped off logs, and patches of tiger lilies grew on islands mostly covered with floodplain forest.

From where the river makes its famous hairpin turn, the banks intermittently expanded and contracted for the next four miles to St. Charles. Wooded bluffs accompanied the river for much of the way. When the woods receded, river houses sat shoulder to shoulder, often with inviting waterside decks and nearby motorboats perched on metal stands. For the moment, I was relieved that the huge fleet of ski boats and beer boats sat idle along the shore. At Norris Woods Nature Preserve, a sandy patch of shoreline in the shade of silver maples offered a good location to take a break from the river, stretch my legs, and eat lunch. 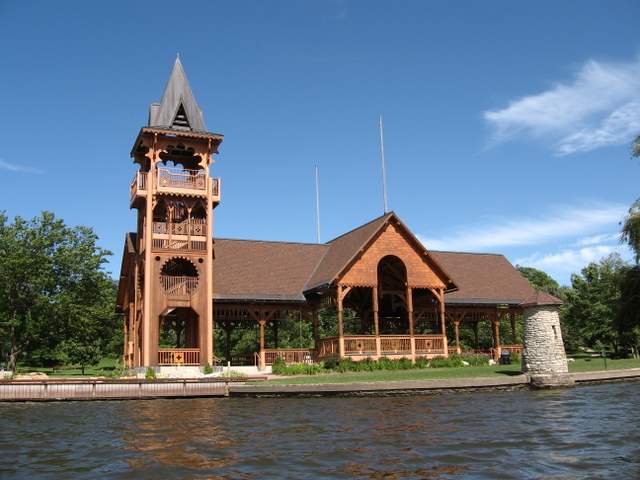 Second portage: long and complicated
It was heading toward late afternoon when I returned to the river only to discover the motorboats were alive and well, and now using the river as a drag strip. A couple of the boats hauled kids around in big inflatable donuts; others were out for scouting fishing or swimming spots; and some boaters were simply joyriding the length of the river. Within this last category, the most puzzling development was the guy on the WaveRunner who passed me at 5 minute intervals, throttle fully open, the engine screaming. He sped downriver and then headed back up, down and then back, again and again. I wondered if something was wrong with him, like a record that keeps skipping.

Arriving in St. Charles, a big paddleboat containing two decks of passengers rumbled upstream. I pulled my kayak out of the water at the back door of the St. Charles Police Department—about 50 yards before the 10-foot drop of the dam that marked my second and final portage. Rising up next to the dam is an Art Deco-style white marble municipal building with an 84-foot octagonal tower. A quick glance downriver revealed that a construction project next to the municipal building prevented access to the regular launch site just below the dam.

After seeking advice from the police department staff, I scouted an alternative put in that required a one-half mile walk downstream. Hauling my fully assembled boat that distance would be grueling. The steady wind would have made it exceptionally awkward to carry it on the narrow sidewalks and across Highway 64, which was mind-bogglingly busy with afternoon commuter traffic. Fortunately, folding kayaks shine in situations like this. In 10 minutes, I knocked the boat down, stuffed it in its backpack, and started walking to the new launch site.

No surprise that the river grows quiet between St. Charles and Geneva—the distance of less than two miles between the dams in each town means fewer homes and fewer people using the waterway. Water birds seemed to prefer this serene stretch of river: herons appeared more frequently, as did geese and ducks; cormorants showed up for the first time, and I’m nearly certain an osprey, rarely seen in the region, briefly soared overhead. 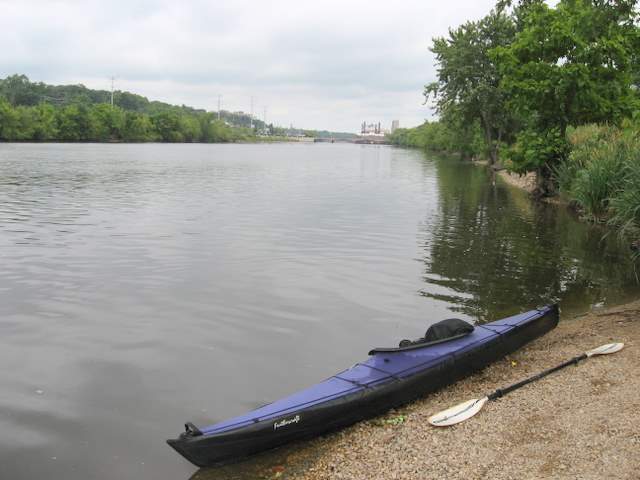 This small slice of the Fox proved to be more welcoming than I expected. I thought I’d quickly grow impatient with the river’s lackadaisical progression. Instead, it allowed me to fully relax while watching tree branches brush the surface of the water and listening to fish jump on the opposite shore. A slow river leaves more time to feel the pull of the water as it gently carries you downstream, around bend after bend, over ripples, crosscurrents, and eddies. In Geneva, 12 miles of easygoing paddling behind me, it was time to disembark for the day. Returning the boat to its bag, I strapped it on my back and started a one-mile walk to the Geneva Metra station to catch a train back to the city. 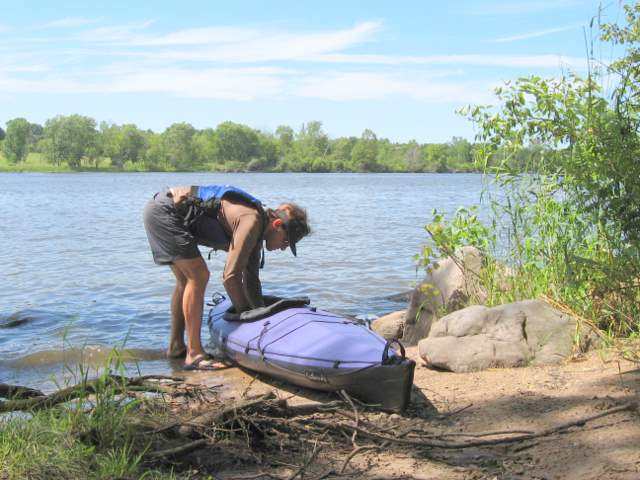 Stopping for a break

If you go
In some ways, the Fox River is a great option for beginning paddlers: it’s wide, slow, shallow, and numerous parks offer spots where paddlers can pull off. Not so great for beginners are the frequent portages around dams and the number of motorboats on some sections. The river’s slow-moving current allows for a type of paddling trip unheard of on most rivers: out-and-back excursions.

Rent a boat: Geneva Kayak Center, the most extensive kayaking store in the region, is located at the take-out point in Geneva: 34 North Bennett Street, Geneva; (630) 232-0320. Will pick up and drop off the boats for you.

Decide when to go: Many stretches of the Fox can get busy, particularly on the weekends; consider paddling during the week. You’ll find more solitude earlier in the day. Ask local outfitters about water levels. Some sections of the Fox—between Geneva and Batavia, for example—tend to be very shallow during low water.

Know the dams and portage spots: Openlands publishes maps showing the dams and portages. Local outfitters will know if portages are clear. Construction will be finished on the St. Charles portage in spring 2010. Be very cautious while paddling near the dams. Fatalities have occurred in recent years at dams on the Fox River. 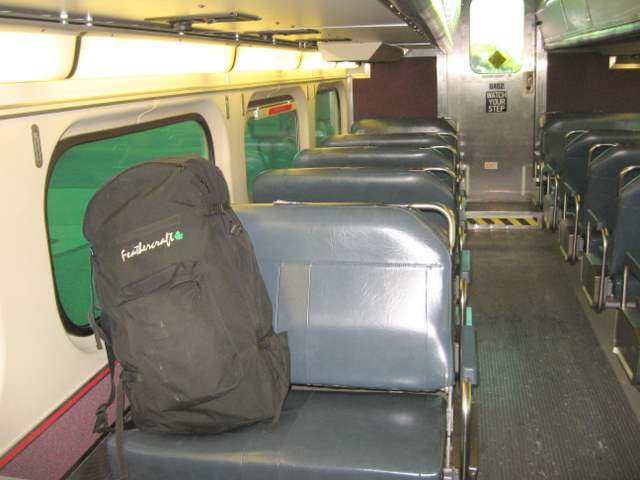 The trip is now in the bag.

Entering the fold
Folding sea kayaks serve as the perfect solution for apartment dwellers who have limited space for storing a sea kayak. They’re also great for the traveler with an urge to paddle and people who like the idea of car-free paddling trips.

Manufactured for the past century and then overtaken in the 1950s with the introduction of fiberglass kayaks, folding Kayaks look and feel much like the original sea kayaks developed by seal and walrus hunters of Alaska, northern Canada, and Greenland over the course of 4,000 years. A boat-in-a-bag will tend to be more expensive than the average polyethylene kayak, but it likely will have a longer lifespan and more stability in the water. With a minimal amount of upkeep, folding kayaks are surprisingly durable. Their sturdiness was demonstrated as far back as the 1950s when a German man crossed the Atlantic Ocean in a standard 17-foot Klepper folding kayak.

Not quite built for crossing an ocean, my 13-foot boat is better suited for inland water and Lake Michigan on a calm day. With a little practice, I can put together my Feathercraft K-Light kayak in 15 minutes. The heavy-duty nylon and rubber skin fits over a frame of aluminum poles. Instead of airtight bulkheads used in the typical sea kayak, inflated bags inside the folding kayak maintain buoyancy in case the boat gets swamped with water. Folded up, the boat fits inside a bulky but very manageable backpack that I’ve hauled into taxicabs, onto trains and buses, and on a trailer pulled by a bicycle.

This entry (Permalink) was posted on Wednesday, May 12th, 2010 at and is filed under Chicago area, Illinois, Other. You can follow any responses to this entry through the RSS 2.0