When cars and bikes collide

As a cyclist, what should you do if you’re in a crash with a car on Chicago streets? My friend Jim Freeman knows. He’s a personal injury lawyer whose clients are primarily Chicago cyclists and pedestrians. Recently, he answered some of my questions about steps to take after a crash, bike safety, and local bike laws. Here’s what he had to say.

What are the steps a cyclist should take after a crash? 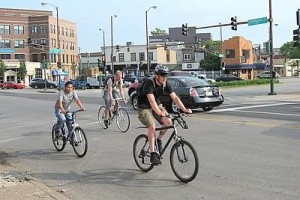 2. Get witness and driver information. Do not depend on the police to get information from witnesses. In almost every case that comes to me, the client will say, “There were lots of witnesses, but I didn’t get any information from them. It should be on the police report.” In most instances, I get the police report and there are no witnesses listed. In a case where the question of fault depends on your word against theirs, an independent witness makes all the difference. So be sure to get any witness’ phone numbers and addresses.

3. Seek medical attention. If there is even the slightest possibility of an injury, you should request an ambulance and go to the emergency room. Adrenaline runs high after a crash, so you might think you are fine; but often there are latent injuries that are not immediately apparent. From a legal standpoint, it’s a good idea to seek medical attention at the scene of the crash.

In your experience, what are the most common reasons for car vs. bike crashes?

Regarding bike- and pedestrian-friendly laws, how does Chicago compare to other cities?

The State of Illinois has some of the nation’s worst laws for cyclists. Cyclists are given a second class status. We are permitted to use Illinois roadways, but we are relegated to hugging the right hand curb, and we must yield to auto traffic under most circumstances.

As a city, Chicago has gone a long way to promote cycling through infrastructure improvements and legislative improvements such as The Bicycle Safety Ordinance passed earlier this year. The Illinois Vehicle Code was clearly designed with only motorists in mind, not cyclists. The changes really need to come from Springfield to improve conditions for bicyclists statewide.

Some states have much more favorable laws such as the stop sign/yield, red light/stop laws, which more realistically consider the practical differences between cyclists and motorists.

What are the most important strategies for avoiding crashes on a bike?

Headlights. Illinois law requires bicycles to be equipped with a white headlight and a red rear reflector. For some reason, cyclists in Chicago think it is acceptable to forgo headlights for a red rear light. If you are only going to have one light it should be a white headlight—not a red rear blinky.

Lack of headlights kills more cases than all other factors combined. If a cyclist is involved in an accident with a motorist at night and the cyclist doesn’t have proper lighting equipment, the cyclist can expect to be blamed for the accident.

Keep your eyes open and ride defensively. Understand that many motorists haven’t learned to look for cyclists. Assume they don’t see you or anticipate your presence. Stay out of the “door zone” and look into rear view mirrors of parked cars as you ride by. If you see someone in the car assume they are about to open their door.

What’s your background in cycling and lawyering?

I grew up in a small town in downstate Illinois. Like all the neighborhood kids I had a number of bikes over the years. In grade school I acquired my first road bike and started to spend time taking day trips in the country. The first few years of my undergraduate education were spent in the Ozark Mountains of Missouri, so I took up recreational mountain biking. I moved to Chicago in 1996, which lead to my first urban cycling experience.

In 2002, when I moved to Logan Square, I discovered the joys of urban cycling and bicycle commuting, and I began to think of the bicycle as transportation rather than recreation. I became a religious year-round bicycle commuter and started racing. I also took a basic bicycle maintenance class, which marked the beginning of a more professional understanding of bicycle mechanics. In 2007, I took First Fixed, Second Overall in the Tour Da Chicago alleycat series, and I started teaching adult wheel building classes at West Town Bikes.

After graduating from law school, I worked for a plaintiffs’ firm, representing injured people for two years. Then I went to work for a defense firm where I worked for insurance companies defending people or corporations alleged to have caused injuries.  After four years of defense work, I left to start my own practice.

I originally thought I would have a diverse practice, but fairly quickly I started getting calls from injured cyclists. Now, I have a busy practice consisting of different personal injury cases, but the overwhelming majority of my work involves advocating on behalf of bicyclists and pedestrians.

This entry (Permalink) was posted on Monday, November 3rd, 2008 at and is filed under Biking, Chicago area. You can follow any responses to this entry through the RSS 2.0