Prairie Fever » Blog Archive » Why I love my hammock

Why I love my hammock

Not to analyze the situation too much, but one of the reasons I dig my camping hammock is the vaguely womb-like atmosphere it provides. The hammock I use—called the Hennessy Hammock—is a green cocoon that offers the most comfortable sleeping experience outside of my bedroom.

Hammocks are perfect for hot weather snoozing. Within a hammock’s soothing embrace, air circulates all around you, and you feel just a bit like you’re floating above the ground. (This quality also leads to the primary drawback of a camping hammock, which I’ll get to in a minute.) 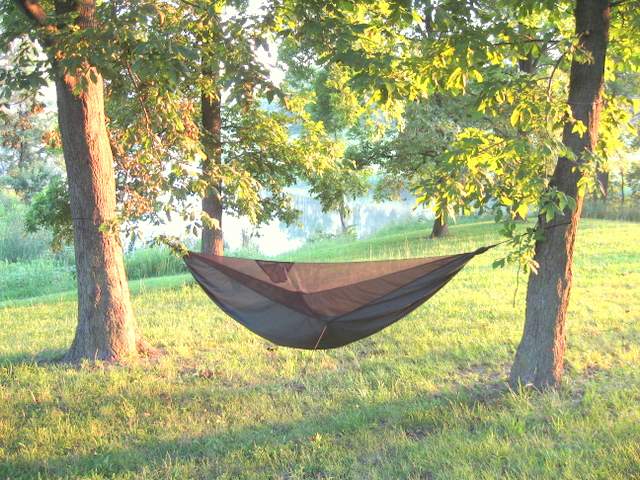 Maybe I’m easily impressed, but the Hennessy Hammock (pictured here) seems to be an engineering marvel. You enter the hammock through the bottom. As you lay down, the hole you entered seals up as a result the fabric tension. Admittedly, once inside, it takes work to get everything situated, and you may have to wiggle and twist and push and squirm to get everything just right. But once you do, it’s perfect.

Stretching out inside this hammock puts you in a slightly diagonal position that is not flat, but it’s much flatter than most hammocks allow. It’s flat enough for me to sleep on my side. Bug netting held aloft by a center string covers the top of the hammock. A removable fly kept me dry in several heavy downpours.

The downfall of camping hammocks is that they’re useful for only part of the year—at least in the Midwest. After a total of two weeks sleeping in the hammock, I discovered that below a certain temperature, I get too cold. Even if I’m wrapped in a down sleeping bag rated to 20 degrees, I get uncomfortably chilled if the temperature approaches 50 degrees. Sleeping on an insulated pad adds warmth, but it tends to slip out from underneath during the night.

Another drawback: Because it’s awkward getting situated once inside, the Hennessy Hammock—and camping hammocks in general—are probably not the best option for people who make frequent visits to nearby bushes during the night.

Also, I learned the hard way to spray the outside of the hammock with bug repellent if I’m not using my sleeping bag while dozing in the hammock (I’ll spare you the photo gallery showcasing many dozens of mysterious bites on my legs that I acquired through the hammock’s nylon fabric).

Despite these shortcomings, the Hennessy Hammock is the bees’ knees for summer camping. It comes in various models ranging in price from about $100 to $250. Outdoor gear nerds will salivate over the weight: the model I have weighs 2 pounds, 10 ounces. It usually takes me several minutes to set up.

For more info: Backpackgeartest.org offers reviews of a number of camping hammocks, including the Hennessy.

This entry (Permalink) was posted on Thursday, August 28th, 2008 at and is filed under Camping. You can follow any responses to this entry through the RSS 2.0

2 Responses to “Why I love my hammock”